The 2nd (and hopefully annual!) "Tri the Coast" sprint triathlon was held on June 6, 2010 at the Colony Club in Half Moon Bay, California.  The event is hosted by "Pre and Post on the Coast," a local provider of pre- and post-natal nutritional and fitness coaching.  It was billed as a "non-competitive sprint triathlon...great for those who are new to triathlons as well as for the seasoned triathlete looking to practice for upcoming events."  I really wanted to do this one, since it was local, but it was the same weekend as everything else that was going on.  No way did I want to do the whole thing by myself, and be useless for the rest of the day (which saw the birthday party with the blue cupcakes...at the same location, coincidentally!).

However, it turned out to be an excellent opportunity to fulfill a wish from my last event:  involving friends in a triathlon relay and sharing the fun!  When I emailed my neighbor, J, about it (hi, J!), she wrote back that she had just been reading my Treeathlon race report, and that she would like to try the swim portion.  (Oh, how I love a coincidence that seems contrived! :-)  She also knew a mom at her son's school, S, who enjoyed running (S did the Nike Women's 1/2 Marathon as part of...you guessed it! Team in Training!), so we had our runner.  And I was delighted to take the bike portion.

Sunday morning dawned dim, foggy, and early.  I tiptoed around, eating...oh, heck, I forget what it was now.  I think it might have been "spackle" (oat bran+flax+peanut butter+sugar-free syrup), but it might have been my flax toast with almond butter and sugar-free jam.  And coffee.  Definitely coffee.  S and J showed up and we hopped into the van.  Loading the bike took a little umph, but we got it wedged in there.  (BIG thanks to Mr. Handsome-and-Handy for doing my pre-race tire and bike check...*sigh*...love my support crew!)

We arrived at the Colony Club, a posh facility shared by Ocean Colony and the Ritz Carlton hotel.  The swim was held at the Colony pool, with the bike portion making two loops through the grounds and onto adjacent trails and roads, and the run circling through the coast trail.

We parked and headed up to the transition area, which also served as the registration area and finish line.  We checked in, and were each given a swim heat time. (In this triathlon, two swimmers shared each of the four lanes, and the next heat started when the previous swimmer finished.)  We all looked at each other, feeling that "uh oh" feeling.  "Um," I said, "We signed up as a relay team.  J is going to swim, I'm going to bike, and S is going to run."  I was feeling a little embarrassed, but Meredith (the owner of "Pre & Post") came over and knew what I meant about doing a relay.  Whew!

We then discovered what the "non-competitive" part meant: No bibs, no timing chips, no body marking.  No timing of the participants at all.  I worried a little that J and S were going to feel like they hadn't gotten a "real" triathlon experience, but I shouldn't have.  It turned out to be exactly what they wanted: a chance to get out there and do a triathlon relay out without pressure.  This also worked out pretty well for us, in that S didn't need to wait until I was done with the bike to start her run.

We sat around and chatted until it was time for J's swim.  She did great!  We were impressed by her even, methodical front crawl.  She finished quickly, I think it was about 13 minutes for the 500 yards.  (J, if you're reading, feel free to correct if I was wrong about that.)  Woo hoo!!!

We wandered up to transition, and they saw me off on the bike.  The bike was a fun but bumpy course.  It comprised two loops, going out past the Ritz Carlton, up Miramontes Rd. (a moderate hill), then back the same way, almost to the pool building, but onto the coastal trail and past the golf course.  As the trail left the Colony Club grounds, it got super steep (I had to get off and walk), went over a wooden bridge, then a very narrow dirt trail through a fence.  The event web site said that the event "allows families to participate in the run and bike portions of the event with their children," and that "strollers and bike trailers are welcome," which is extremely cool, but I think it would have been tricky to navigate a bike trail through the dirt trail part.  On the plus side, with the swim going in heats, there was never a bottleneck of riders in the narrow parts, even if there had been more participants.

After the narrow dirt trail, there was a bit more coast trail, then a segment along Redondo Beach Rd., which was rolling hills and lots of potholes!  I had my camera tucked in my vest pocket, and I wondered if *that* was going to be the thing that fell off during the bike, but no worries.  I also had to windshield-wipe my glasses now and then with the thick fog.  It would have been a much lovelier ride on a sunny day, but it was fun, seeing all the smiling faces, several lit up with that "Oh-my-gosh-I'm-really-doing-this-thing! I rock!!!" look.  Loved it!  Another loop of the bike course, and I was done.  I took about 45 minutes for the 9 miles.

S had started on her run about 10 minutes before I got done--I'd seen her go when I was finishing up my 2nd loop.  The 5K run went past the Ritz and onto the coast trail, where it meanders through the golf course.  It was somewhat hilly.  There were two loops: a shorter loop around the course, then a longer loop that went down to an overlook, then back past the front of the Ritz.  I have only walked part of that trail, and I really want to run it myself, it looks like it would be a beautiful run.  S enjoyed the course quite a lot, and I'm not sure exactly what her time was, but the glimpse I caught of her watch looked like about 33 minutes. (S, if you're reading, please feel free to correct in the comments!)

So we picked up our t-shirts, which featured the cutest logo!  There were bagels, fruit, and water for the finishers, but we didn't feel like eating.

We headed back to my house, chatting about possible future triathlons, and agreed that it would be really fun to do part or all of them together someday. S and J walked back to J's house, and I pulled my bike out of the back of the van.  And the tail light fell off!  I laughed loud and long, because *something* always falls off my bike on triathlon days.  At least it wasn't me! 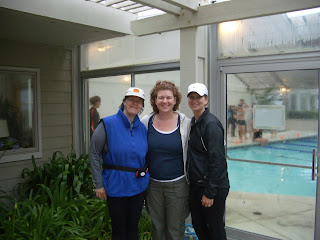 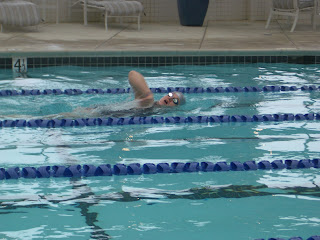 "Mermaid," pounding out the swim! 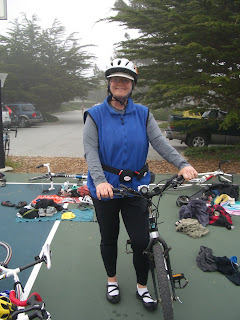 "Biker Babe," heading out for the bike 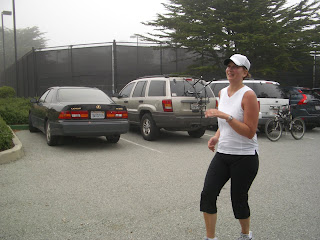 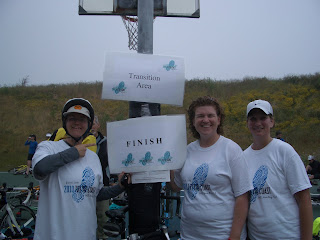 Oh, I forgot to leave a comment last night. Glad I checked back! I LOVE your race reports! You should be the official race reporter for the blogosphere. Thanks for sharing the details.

great job! :) sounds like you had a couple of great partners for the race

You are amazing. I love how you just jump in and say, let's do this!!

Great race report! I want to get a bike now!

That sounds fantastic! And it's awesome that you got to do it with friends, too. Congratulations!

I have learned that sharing events w/ others is soooo much fun! Glad you gals had such a blast! Love the 'handles,' pics, and t-shirts! I'm LOL about something falling off your bike on race day. Agreed: glad it wasn't YOU. :)

Fantastic - you must be so proud. I love your attitude, you are totally inspiring.