Or, "A Volunteer's View of the Half Moon Bay International Marathon"

So much to write about, so little time! But I've gotta take a little time and write my latest race recap...

On Sunday, September 25, 2011, I woke bright and early and prepared to head over to the inaugural Half Moon Bay International Marathon. It was actually several running events: a free 5K, a 10K, a half-marathon, and a full marathon.

Sadly, I wasn't going as a runner. Or even a walker, for that matter. It sold out!  But it was as something I'd been wanting to try for a long time: as a volunteer. So if I wasn't racing, why did I have trouble sleeping? Maybe I was channeling all the pre-race vibes floating around our town...

I arrived at the parking lot at the base of the Pillar Point bluffs before dawn.  It was dark, but not too cold.  There were staff people coordinating the high schoolers who were stationed along the bluffs to direct people along the trails.  The aid station organizers arrived, and we set to work:  mixing the electrolyte drink, cutting the Cliff block packages in half, and setting out cups of water and electrolyte.  The wasps were bad - trying to swim in the electrolyte cups and all - but no one got stung, thank goodness!

About an hour later, we heard the sirens:  the marathon had begun!  The event was limited to 500 entries across all races, and there were a little over 100 people in the marathon.  However, they would pass our station four times, so we had to be ready for them.  I liked the way the race bibs had the participants' names printed on them, and how there were red bibs for the first time marathon racers - a nice touch!  We cheered, we handed out goodies and beverages (it made it easier when runners would call out what they needed before they quite got to us, so we could direct or get the right thing in place).  We chatted in between waves.

One marathon racer, I noticed, was carrying a pink rose.  On his 4th pass, we found out why:  he was racing in memory of his wife, who had died this past spring of breast cancer.  She was only 42.  Hoo boy, that really got to me.  We all gave him hugs and wished him well, and not just in the race that day.

On a lighter note, on the 3rd pass, one of the runners called out, "You must cheer on my beautiful friend Dee Dee, who's right behind me and is going to pass me soon!"  So we all started chanting, "Go, Beautiful Dee Dee, go!" 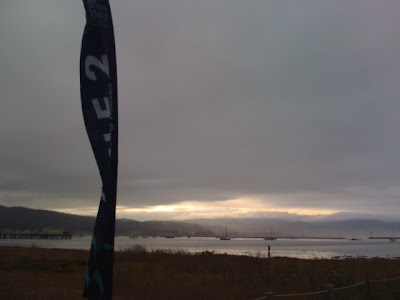 Our aid station was near Mile 2 of the first loop,
the trail out to Foo Rock at the foot of the Pillar Point bluffs 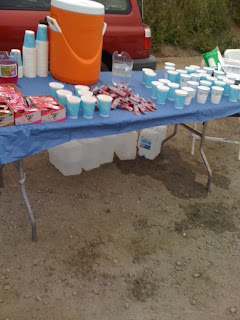 The aid station, all stocked and ready!
Our station leaders were well-prepared! 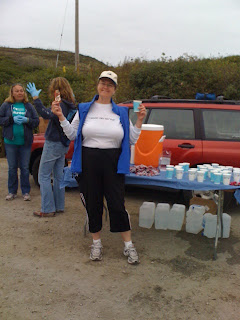 How 'bout a shot?
(Yes, that's my "I though they said 'rum' " shirt.
Too bad it was too cold to show it off, except for in this picture!)
After my time at the aid station, I went over to the start/finish line to help. They had the essentials pretty well covered, so one of the staff members had me help as one of the recycling assistants. While I felt a little superfluous at the time, helping people properly sort their disposables, I think the event has a good shot at their goal of attaining a Gold Certification through the Council for Responsible Sport organization (CRS), if this picture of the landfill waste I saw is any indication: one of those big ol' garbage truck boxes with a bitty pile of bags at one end of it.

What was cool was talking to the finishers, and seeing some familiar faces. One was of one of my former neighbors who ran the 1/2 marathon; she placed 13th in her age group! Another was one of the women in my hula class. I also saw the Pink Rose Runner and his family, but he was without the rose. I saw this photo later: he had laid his rose at the finish line.
Posted by Pubsgal at 1:01 AM

I would have totally cried over that man with the pink rose. And that is scary close to my age (43)...

I never thought of volunteering for the race instead of running it!

Wow, I must have mental telepathy or something. Just decided to check in and there you are with a race report!

That was a great story about the man with the rose. Well, the whole story was great--thanks for sharing. I like the idea of volunteering at a race a lot more than running a race!!

love this! that is truly what racing is all about - the people you meet, stories you get to hear about. the sense of community.

I got teary reading about that man. So sad.

I love the shirt!! So sad about losing your spouse at such a young age - makes you not want to take each day for granted!

Just wanted to stop by and give you a virtual hug! :D