Scenes from the Weekend

Overall, it was a fine weekend:  I enjoyed my time with Mr. Handsome-and-Handy and Things 1 & 2, and we helped my sister-in-law celebrate her birthday.  The kids got to play with their friend who lives a couple of doors up from us; it's one of the best plus sides to where we live.  I made a dent in the to-do list.  I ate entirely too many macadamia nuts.

However, some of my weekend was spent in a grey funk that I wasn't really sure how to shake... 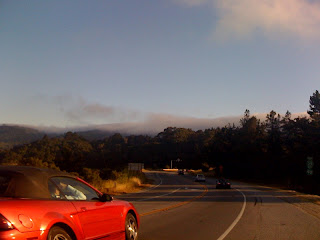 See that grey stuff along the hilltop? This was Friday night, and my home is swathed in it.  While most of the California is bright, bouncy, and energetic on a sunny summer weekend, we coastsiders get gloom.  It's enough to make an Eeyore out of the bounciest Tigger.  By Saturday evening, I had that soul-squashed feeling going on.  (Of course, I can't only blame the fog.  Two days without a good workout might have had something to do with it.)

So Sunday afternoon, I went for a little bike explore... 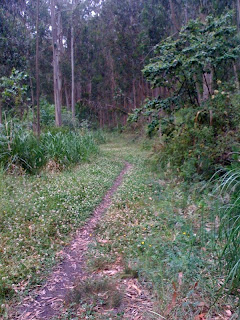 First stop was Quarry Park for a ride into a eucalyptus forest.  There were some serious hills for me, and my lower gears tend to slip a bit, so it was tough going.  I had to get off and walk several times.

I cruised through El Granada (more hills), past the harbor and through Princeton-by-the-Sea (picturesque name for a rather scruffy industrial area around the harbor), and to the Pillar Point trail, which I'd never explored before: the parking lot has always been too full when I tried.  Not a problem with the bike! 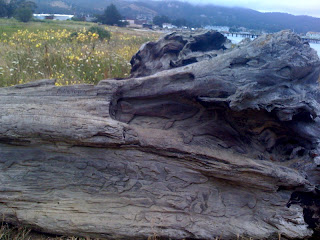 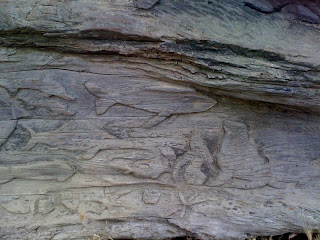 Here's the beach behind the breakwater; lots of dogs romping in the water and fetching things.  Out in the ocean on the *other* side of the breakwater is where the famed Maverick's surf contest is held.  No wave action today, so the young man whom I told "Out there" when asked, "Where's Maverick's?" probably did not believe me. 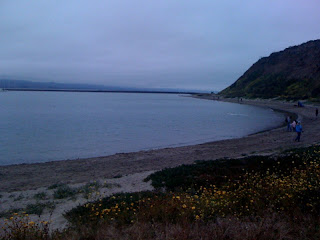 Another curiousity along the trail: a labyrinth!  It faces due east, so on a clear morning, this must be an especially nice spot.  Of course, I had to stop and walk it, although I'm not sure I achieved much of a contemplative state. 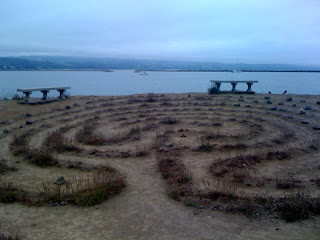 I started my ride with a jacket on, but after awhile I got kind of warm.  This is my "See Jane Tri" t-shirt, of which I'm ever-so-proud.  I received many bemused glances.  Mental click!  I suddenly felt like a walking billboard for cannabis. 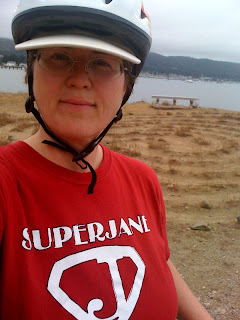 After exploring the harbor, I proceeded south on the Coast Trail, past the boat launch and beachgoers, past the surfers, with a brief pause for a bake sale (and a homemade chocolate chip cookie-yum!).

Here's the luscious Cypress Inn B&B.  Ah, memories!  We spent part of our honeymoon here, and then made another visit (had to use a travel gift certificate before it expired) when I was pregnant with Thing 1.  Oh, that was too sad:  I'd been diagnosed with gestational diabetes and it hit me fiercely.  Insulin shots and missing the evening dessert were no fun.  Nor, also, was the nocturnal mosquito swarm!  Generally, once can leave screenless windows open here and not get bitten, especially by the beach.  However, we forgot about the nearby seasonal creek, which was probably standing water by then.  For once, Mr. H&H got bit worse than me.  I understand that they added screens to the doors and windows after our stay, though. 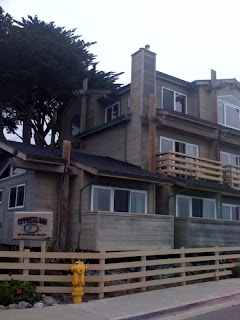 Just past the Cypress Inn, there's an unusual building. It was kind of impossible to photograph at a reasonable (for its inhabitants) angle, but I did catch these fun planters on the gate. 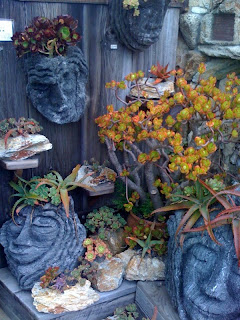 As I turned up my street, a huge group of cyclists went down the highway:  flashy jerseys, nice road bikes, going fast. Too quick to get a photo. *sigh*. I try to not compare, and I'm generally not one of those "I-must-go-out-and-buy-all-the-best-sporting-equipment" type of people, but I did have a brief "feeling shabby and back-of-the-pack" moment. But having gotten a good workout and checked out a few nooks I hadn't explored before, that feeling didn't stick around very long.

Finally, I have to show you my neighbors' fascinating agave plant. I've been watching it since this enormous stalk started erupting from it. Agave take a long time to bloom, and they only bloom once in their lives; sadly, this plant will die after it is done blooming. But it's putting on quite a grand finale. The photo is kind of dim, but you can see that the flower stalk is taller than the street light. I'll see if I can get a better shot with a proper camera one of these days. 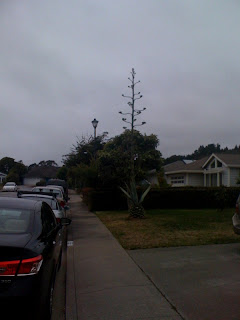 those wood carvings are amazing!!

What a gorgeous ride!! Thanks so much for taking me along.

Those trails are beautiful! Oh how I would love to be on them.

I hear you about the shabby thing. I upgraded my pedals to clips, got new tires, and a bike computer, but that doesn't hide the fact I have a cobbled together used Schwinn bike.

What a great way to break out of the doldrums. I've got news for you. I can get the doldrums even up here on the mountain where we never get fog!

I just love the idea of taking a bike ride and sharing the sights along the way. Thanks for sharing with us! And those log carvings are amazing. That pointed thing above the carvings looks like a pelican head to me.

Thanks! I think I want to do more "explores" like this. I love how you all incorporate lots of photos into your blogs.

@debby: I didn't notice the pelican head until I was looking at the pictures afterward. :-)

I love this explore! Keep them coming. :)