Hey, it's September!  We've already been back to school for a week, helped bake and wrap 3,642 big-as-your-head cookies for the school fundraiser, and will be helping to sell them this weekend at the Kings Mountain Art Fair.  (If you're in the San Francisco Bay Area, it's totally worth going!) 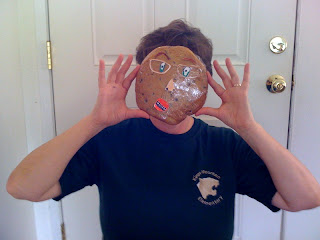 Thing 2 "cookiefaced" me...the resemblance is uncanny, no?
(Wish I could really arch one eyebrow like that!)
I am...

Adjusting to The Things being back to school.  Yep, we're back already!  Thing 1 has the same teacher, and some new kids in his multigrade class; at least we know what to expect.  Thing 2 has a new teacher, and she's enjoying it quite a lot.  (Some stuff is still being taught by her Kindergarten teacher, because all the classrooms are multigrade this year.)  She brought home this red bull stuffed animal that she named "Bruce the Bull Cow," a prize from the prize box "for winning a very hard game," she said. 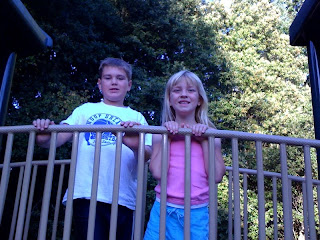 Gearing up for the ambitious Shrinking Jeans Monthly Project: Free Yourself Once and For All.  I think that will probably be taking a bit of each month for the rest of my life, that one.  And funny, the things that have sort of coalesced in this area.  I started listening to the book The End of Overeating.  (I know, discussed ad nauseum in the blogosphere last year...I'm a little late to the party.)  I saw a post today on the blog Stop Renting Weight Loss titled "Convenient Fat," which discusses the question, "What could we accomplish if we didn’t struggle with fat, diets, calories and food?" Which in turn reminded me of the Phineas & Ferb episode in which Dr. Doofenshmirtz builds the "Junk Food-inator" in order to make all healthy food unhealthy, thus rendering the overweight citizens of Danville easy to control. Hmmm. Kind of makes a girl wonder....(if she watched too many X-Files episodes, if nothing else! ;-)
Getting aware of my personal cash flow.  Frugality is a virtue in my husband's family, and Mr. Handsome-and-Handy has been a great influence on me financially.  When we got married, I told him I didn't want to combine our finances until I was debt free.  So I paid off my car and my credit cards, while contributing equally to the house and other expenses.  Luckily we tend to have similar financial goals and values, which helps keep things going smoothly, but I feel like I haven't been fully doing my part to manage my own cash flow.  While I've done pretty well with less restaurant and Whole Foods eating, when I do go, I feel like I'm spending too much on something that's just for me.  Treating myself once in awhile is fine and fun, but I tend to go a little overboard when I walk into Whole Foods.  So I'm sort of making a game out of "how long can I keep this cash in my wallet?" and "how long can I go without going to Whole Foods?" (It's been 2 weeks so far!)
Doing fine with my health numbers and feeling a lot better after the weekend.  I was sick on Monday, but I'm feeling quite a lot better.  I'm not sure if it was a bug or some mild food poisoning, but a day of fairly bland eating and resting got me back in order.  7-day averages for fasting blood glucose was 111 and 7-day overall average was 108.  Over the past couple of weeks, my weight went up a couple of pounds, then back down a couple of pounds...still in the same range, which is comforting.

Not on plan with my training, and NOT okay with it.  I know that my schedule has changed, and I am not beating myself up about it.  But I just need to get those runs in, plain and simple, while they are doable.  Because in a couple of weeks?  The miles and times really start to ramp up.

Part of the problem is being utterly DOM-inated by my CardioSculpt class, and it's been taking a couple of days for it to go away.  I've adjusted slightly to work the arms more than the legs, but today's class?  Whew.  Even without extra weight, I think all those lunges and one-legged squats are going to really hurt tomorrow.  (But I LOVE the instructor...she's really mixing things up now that we no longer have to follow the old class format, and we're going to get so much stronger!  Yeah!)  I think I just need to switch my rest and run day, and then follow through on the run day. 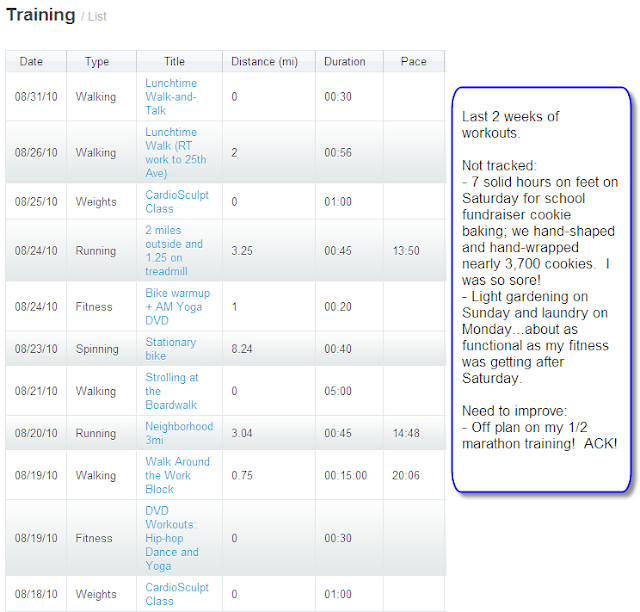 I want to...
Let myself off the hook for finishing Savor. Great book, but it's going to be due back at the library soon, and I just don't think I'll have it finished. I'll just get as far as I can. And hope the library eventually gets an audio book.

Knit while on homework supervision duty. Because I get stressed out while cracking the whip, and I need something to do with my hands that has nothing to do with eating nuts. (Crunching down the nuts distracts Thing 1, too.)

Make my doctor appointment and get my blood work done. It's checkpoint time for the health numbers!

Get on track with my training. I need to get in at least two runs before next Wednesday. (3 would meet my training schedule, but I'm not sure how the holiday/volunteering weekend stuff will impact that.) So here's a tentative schedule:

Thursday: Rest or run after drop-off but before work, depending on whether my leg muscles are still speaking to me after today....
Friday: See Thursday; rest if I ran, or run if I rested.
Saturday & Sunday: We'll be attending and working at the fair, respectively, so that will be my functional fitness.  Get in 30 minutes of at-home upper body + abs strength stuff over the course of the weekend, too.
Monday: Enjoy a long run outdoors.
Tuesday: Ride 30 minutes on stationary bike and run 1 mile on treadmill with sprint intervals.
Posted by Pubsgal at 4:36 PM

You're so healthy and organized and you have it so together...will you come to my house and be my personal life coach for awhile? :)

@Jill: Yes, over 3500 cookies, shaped by hand. No, I did not eat any dough. Yes, I noshed on several flavors on the broken cookie tray next to my wrapping station. Thank goodness the baking was such an intense workout.

Re: paragraph 2...glad I wasn't drinking a hot or fizzy beverage when I read that. I should just send you Mr. Handsome-and-Handy instead. Except that things would lapse into chaos here; he's the real organizational powerhouse at Casa de los Pubsfolk.

Love the cookie picture!!! Hahaha! Wow, proud of you on not eating dough, I would not be so vigilant. And by the way I can just hear Dr. Doofenschmirtz's voice, "The JUNK-FOOD-IN-A-TORRRRR"!!

I'm with you on the training. You jump I jump. The end. XO

As always, an inspirational and amusing post. Tell Thing 2 I think she is quite the artiste.

I just can't believe you didn't nibble on cookie dough. Was it the presence of other people or just your inner super powers?

Off to check out that blog you mention.

I'm a little nervous about this month's challenge. you're well read on the subject - i think i'll be following your lead. i recently checked out "thin within". basically how to redirect your focus back onto God - resulting in the end of food as comfort, but also obsession of getting skinny.

@ChristieO and @debby: I do love the cookie dough, and at home, I do eat some. We were working in a commercial bakery, which definitely set a more professional tone. We were shaping it all the cookies with our hands and needed to keep them clean; I'd have been licking my fingers, then running to the sink, repeatedly. It was much easier to nibble on a baked cookie chunk and avoid the hand-mouth contact.

@Brooke - Listening to "The End of Overeating" right on the heels of "The Millionaire Next Door" was a great segue. There's a lot of discussion in Dr. Kessler's book about how the food industry works to create ever-more-irresistible foods, at many price points, to get consumers to indulge (and part with their hard-earned money). Although I have to say, all the sensual descriptions of food in this book could be a really triggering experience for some folks, although I'm sure it's enhanced by the narrator's inspired reading. :-)

Great pic of cookie face and the kids. Getting used to a new schedule is hard, but I know you'll get back on track. Looking forward to seeing your knitting projects too! (And if you are casting about for something to make, I can think of a certain puppy who could use a warm fall sweater. I'm just sayin...). ;)