I Ran for Chocolate and Champagne!

On Saturday, I ran in the See Jane Run "I Run for Chocolate and Champagne Half-marathon and 5K." What an awesome event! Definitely worth getting up at 5:15 a.m. and driving for an hour to get there.

The Details
With a name like "I Run for Chocolate and Champagne," there was no WAY I could pass up the opportunity to run this race: I wanted that t-shirt! So I signed up many months ago.

Most of my training during the past couple of months has shifted from primarily running to preparing for a sprint triathlon in September. So I've done less running, but I've added strength (BodyPump class) and an intense spin class each week. I feel like these have really helped push me to develop more strength and endurance than I would have on my own. So I wasn't nervous about the run itself. I was nervous, however, about driving to a part of the Bay Area with which I'm totally unfamiliar and getting there in time for the race! Mr. Handsome-and-Handy gave me a tremendously nice gift: he looked up the course and showed me how to get there on Google Maps. (Highlighting key points with street views...I'd printed a map, and had a GPS to navigate with, but this prep-time ended up helping quite a lot.)

Being a Friday night at Casa de la Pubsgal, though, no one got to bed early. I laid awake for a long time...woke up several times during the night...and ended up with only 5 hours of sleep. Stress + lack of sleep raised my fasting blood glucose to nearly 20 points higher than normal! Oh great, something else to stress about! But not for long; it was time to go!

My stomach was in knots on the whole way to the event, but I found my way to there, eventually found a place to park (fortunately, lots of free residential parking), and made it to the starting area. Whew! I picked up my bib and chip, navigated the humongous line through the porta-potties, checked in my bag, and cheered the start of the half-marathon. Lots of runners going the big distance! (Nearly twice as many as were running the 5K, I later found out.) I wandered around and had a snack, got my temporary tattoo, and then participated in the energetic warmup. All while trying to find fellow type 2 diabetes & wellness blog buddy, Foodie McBody, via Twitter! (Read her excellent race report here.)

Time to line up! The grey morning fog was not going anywhere, but it was still scenic, with a line of palm trees down the road to the trail that ran along the bay. Race organizers had marked the palm trees with one's "per mile" time as a guide to where to line up; I positioned myself around the 10-minute mile, near the middle of the pack. The horn blasted, and we cheered and were off! I underestimated how long it would take for the crowd to shuffle-bounce through the starting gate and onto the course. I found myself passing people; a curious sensation! I wondered a little if I was pushing myself too hard. But then I decided to just go for it, because in previous races, I think I didn't push myself hard enough.

I loved everything that I loved about my first race. Even though I wasn't running with anyone, I felt that feeling of community with the other athletes. I loved seeing the line of people winding through the course. I loved that there were so many people of various ages, shapes, and sizes; so many people out there, giving it their best! And I love the cheering for/being cheered by all of these stranger-friends during the race; I made an extra effort this time to do so, since I still feel kind of shy. (One woman had on a tank top with the following words printed along the bottom edge: "Does this shirt make my butt look fast?" No shyness about cheering that sentiment!)

The first mile felt really fast. Just past the 1 mile mark, I started seeing runners heading back from the turnaround. Wow! I reached the turnaround point and felt heartened, got back to the water stop and thought, "Yes! I'm almost there!" But just past there, the course diverged, and I think I misjudged how far it was. I saw the finish, and it looked straight ahead, but as I got closer, I noticed that the course made a fairly large loop up into the park. The race started to feel really long at that point. I tried for a final kick once I got closer; my body was still okay with running, but it refused to sprint. OH well. I whooped a hearty "woo hoo!" as I went through the finish, delighted at knowing I did WAY better than my race in February and even the race back in October.

At the finish line, we got our chips clipped off and the wonderful medals! (My kids especially love these!)

The race after-party was nice! I caught up with Foodie McBody and got to meet her family, too. We wandered around and collected post-race swag: t-shirt, champagne flute with 3 chocolates in it (yeay, a little 70% dark chocolate wedge!), snackies, water, and the like. I hung out a little while longer after Foodie & family left, soaking up the atmosphere, doing a little shopping, and checking out the official results. (I should have done a little more *stretching*, I'm still sore today!) I felt a little twinge as they announced the half-marathon runners' names as they crossed the finish line. I didn't think I wanted to do longer running races, but that twinge made me think again: "Hmmm....maybe someday."

Pictures!
Here are some scenes from the race... 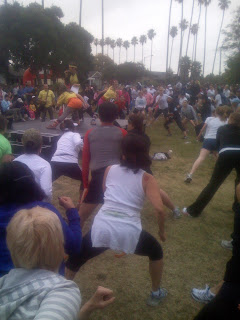 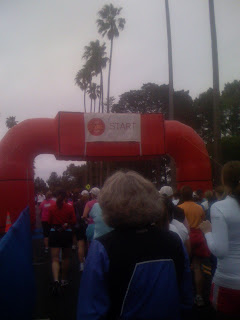 At the starting line. There were 747 people running and walking in the 5K event. 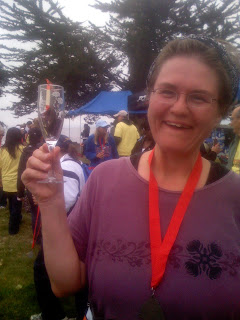 Sweet victory! We all got great race-day swag, including medals, a glass champagne flute, and an awesome t-shirt, as well as lots of free snackies. 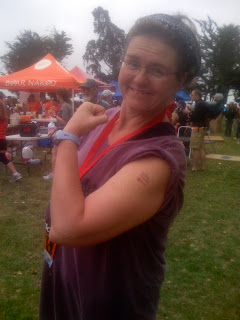 Oh, and the cool temporary tattoos! 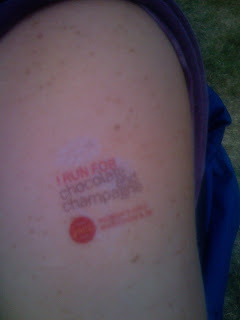 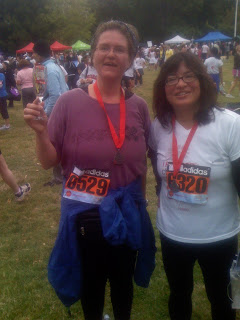 Best of all, I got to meet fellow blogger, Twitter-buddy, and Team MizFit member: the wonderful Foodie McBody!
Posted by Pubsgal at 1:17 PM

Did some one say chocolate? Now that's my kind of race.
I am amazed. You really do inspire me. Congratualations!

The Hubby and I just decided to find a 5k to run this Aug and work towards a 3 mile run.

I'm proud of you for getting this race under your belt and for capitalizing on all the free swag. I know the twinge you're talking about with the longer races. Maybe step up to a 8K or 10K next?

Great post!!!!! and so great to meet you! I loved re-living it through your perspective. See you again at the next one?????

you are now officially ahead of this woman who has never done one race.

WOOHOOOOOO!!!
Congratulations!!! And you look so great!!!
I'm so proud of you! And what a kickass time!! That's my next goal too, a 5k under 30 minutes. it doesn't feel like such a dream anymore!!
I am so proud of you, you really are such an inspiration!!!!!

Sounds like a great race, and congrats on the PR!

Love the pics; thanks for including them!

Thanks, everybody! :-) I can hardly wait for next year! (Though I think I'll try to restrain myself from shopping after the event. See those moths? That's what's left of my wallet.)

Wow, you should be so proud of yourself for shaving so much time off of your time!

Glad you got to meat up with Foodie too!

Wow! What a great post. It gets me so excited to read how you felt at your first race. Way to go! Chocolate and Champange...count me in! lol
XO Shannon

Congrats, Pubsgal. What a great motivating name for a race--haha!

I am really impressed by your time. That is excellent!

OH WOW champers and chocolate... how can you go wrong with that? And a brilliant speedy time too :)

I am running the ran for chocolage 5K... yay! I like your post is very encouraging. I just started with the nervous knot today...

Guess what? "Maybe someday" was this past weekend. You had to walk a lot of it, it was painful, but you did it and finished before the course cutoff! 3:28:29