(Thanks, everyone, for the congrats on my "tweet"-style posting yesterday!)

Oddly enough, the big question of the day wasn't, "Can I finish a 10K race?"

Nor was it, "Will I finish last?" (Small race, so I was almost positive the answer would be "yes.")

No, it was, "How many bottles of Metromint can I snag without feeling rude?"

The Pillar Point Run was my first foray into 10K races. The event featured a 10K, 1/2 marathon, and a family fun run to benefit the Coastside Infant Toddler Center. The event itself is well-organized, although I would have liked to see a little more information on the beneficiary's web site.

Unlike Saturday or today, Sunday gradually transitioned (can't really say "dawned") from dark to gloomy. I ate my oatbran-protein pancakes with peanut butter and sugar-free syrup...and 1/3 a glazed chocolate donut. (Heh, funny side note: my spellchecker caught "donut" and suggested "donuts"...I guess one donut or less does not compute!) I rode the 3.25 miles to the race location at Pillar Point Harbor, and a fine coat of thick mist coated my glasses along the way. As I arrived, the half marathon was just starting, so I had about a half hour until the 10K race. 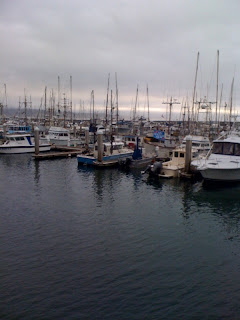 Lovely day for a run! 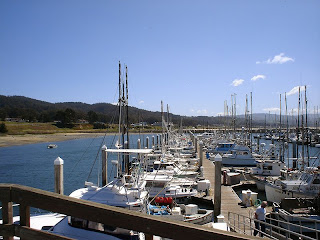 But thanks to Mr. Robert E. Nylund and his submission on Wikimedia Commons, here's what the harbor looks like on a nice day! And no matter what the weather, it's always a good place to get fresh dungeness crab!
I saw a woman I knew from my mom's club days--she was there with her little guy for the family fun run--and she made me laugh with her tale: she was visiting her sister, and they decided to run a race. She had a new baby, and she didn't have her jogging stroller, but they figured the snap-your-carseat-in variety was fine for a taking-it-easy 5K. Toward the end, they went to pass this guy, and he bellowed, "No way are two MOMS WITH A STROLLER going to pass me!" And it was ON! My friend only stopped sprinting when she realized that the wheels of the stroller were shimmying too much to be safe for the baby. (Her sister did pass the finish line before He of the Fragile Ego, though.)

I was laughing so hard I didn't hear the call for the 10K, and scooted into the back of the pack just as they shouted "Go!" (Whew!) 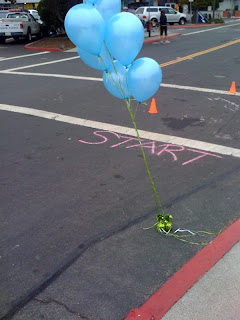 Here is the grand starting line!
Being a very small field, I quickly found myself bringing up the back of the pack. I kept chanting to myself, "Run your own race...run your own race..." to keep from getting discouraged, but soon I fell into a good running rhythm. I have the runner who stayed just ahead of me the whole time (whom I'll call "Pace Lady") to thank for that; she kept a good, steady pace going for the entire race.

The course is an out-and-back course, and it follows the area's coastal trail; it's nice and flat, and my favorite run. Although you see the same up-close things (houses, trees), the greater back-ground view is different: mountains and distant cliffs on the south-bound direction, different mountains and harbor on the north-bound. And who gets tired of watching the breaking waves? In a way, I'm glad it was a grey day, because I would have been too tempted to stop and take a bunch of pictures along the route!

Not a lot of people out and about, but as Pace Lady and I got to about 2.5 miles, we started seeing other runners coming back the other way and cheered them on. It made for nice camaraderie. There was no shortage of aid stops...I think there was one about every mile in the 10K. I didn't stop, though, because I was toting my own bottle of coconut water and it kept me going. I felt fantastic until about mile 4.5, then I felt a little funny, so I ate a glucose tab. Around that time, odd songs kept popping into my head...there was the "Chihuahua!" song (thanks, Thing 2!)...and then, the "Rum and Coca-cola" song...really, I couldn't have thought of anything better? What's worse, I started puffing out the songs in time to my steps; luckily Pace Lady had pulled ahead enough to not hear me. I thought she was giving it her final kick and was going to lose me, but then, I started thinking "quick feet! quick feet! one two, one two, one two" and I managed to pick up my pace a bit and pull up behind her again. Yeah! When we reached Surfer's Beach, I felt that surge of happiness, that "yep, I'm going to make it!" feeling. I wasn't able to go much faster, but we kept a steady pace past the RV lot and behind the breakwater, past the boat launch and Sam's Chowder House, through the parking lot, and OVER THE FINISH LINE! WOO HOO!!!

I walked around a bit, because I could feel my legs starting to cramp up a bit. Walking and stretching helped. I found Pace Lady and admired how *easy* she made the race look; we chatted about the race a bit and I asked her to take my picture. I found the two ladies whom I'd passed, and we all congratulated each other on finishing. 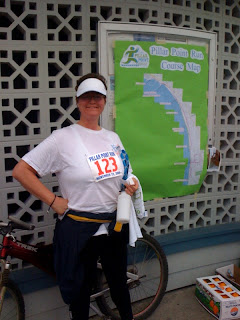 The "Woo Hoo!" post-race grin
Well, I must say the post-race swag was great! They had Odwalla bars and bottles of Metromint, fresh fruit, and these fruit-flavored bottled smoothies. There was also the traditional t-shirt, and Metromint bags to boot! I milled around a bit, called Mr. Handsome-and-Handy ("You're done already???"), stopped for a bit of gelato at a place I'd heard rave reviews of but hadn't been to yet (OMG, so worthy!!!), and then I biked home...on the trail I just ran!

Overall, I'm really happy with the result of 1:09:16. I was hoping to finish in less than 1:30; it was a generous estimate, granted, because I hadn't been training much for the race and I wasn't sure how the longer distance would play out. I'm delighted that I was able to keep my 5K pace the entire time. I'm not sure why, but this felt a lot easier than the Theta Breakers 5K! I wonder if it has to do with getting a proper warm-up. Races in which I've felt really good (Pumpkin Run, See Jane Run and Tri, and this one), I've either ridden my bike to the event or participated in warm-up exercises; whereas races to which I've driven but not warmed up (other than walking around), I didn't feel as good during the race. It seems counter-intuitive that expending energy before a race would be helpful, but it seems to work for me. I really like the 10K distance for racing, so I think I'll be doing some more of those in 2010!
Posted by Pubsgal at 5:58 PM

Bravo! I think your time is awesome!

One of my latest goals is to do a 10k and you have shown me I should go do it!
I love that you found a "pace lady" because I do the same thing! I always try and find someone who is just a smidge faster than me and try to keep up.
Great job and happy THanksgiving!
Courtney
Adventures in Tri-ing

I love your race reports! And that time is TOTALLY awesome. I can't believe you can go that far that fast!

And p.s. I would totally LOVE to get together for a horseback ride. When I was in W.W. that was a goal I wrote down one time, and I never did do it. Let's make a plan for the new year!

I love the summary. Is that a new PR for you? That's fantastic! Congrats!!

awesome job!! i laughed out loud about Ego Guy because God there are so many and this one was FUNNY!! (I want to wear a "You've been CHICKED" shirt so badly one time.)
Good for them!
And awesome time! I think you're onto something here with the warmups. I did a nice warmup for the last 5k and sailed through that one, I really do think that's a key!
Congrats to you!! You OWNED that thing!