Today was the President's Day 5K at Coyote Point! 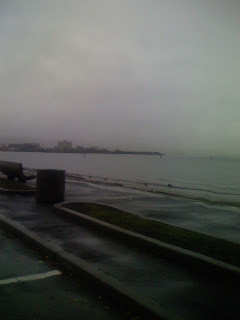 It's a gorgeous place on a nice day...sad to say, but this morning was not very hospitable to racing.... 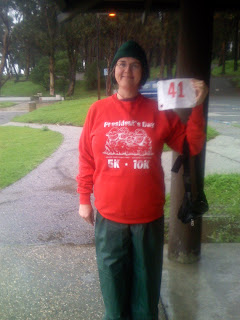 We had quite a storm yesterday, nearly 2.5 inches of rain. Would I be the only nut out there this morning? I called the organizer to be sure...nope, the race was happening, rain or shine! Mr. Handsome-and-Handy, though, dug out a set of waterproof pants and jacket. I woke to another stormy morning, but made a nice, hot dish of oatmeal and peanut butter and went to the race! No, I was NOT the only nut out there! There were folks of all ages and running abilities, and there were even a couple of young kids run/walking with their parents. But I was the only one in heavy plastic pants and jacket. (I squeaked. Oh, the shame.) And we weren't the nuttiest of the nuts...stage 2 of the Tour de California bike race was also happening this morning.

I swear, she must have been a Bumbling Band member in disguise: "No! Today is the day to say, 'If I can do it, so can Lance Armstrong!' "

Then it was time! We assembled at the starting line, and the organizer informed us that the 5K was a little longer than that distance, by about .4 mile. I was near the back of the pack the entire race, and I was worried about getting too tired, so I just kept a steady jog the whole time and enjoyed the scenery. (I'm a pretty slack racer...next one, I'll have to go all out.) 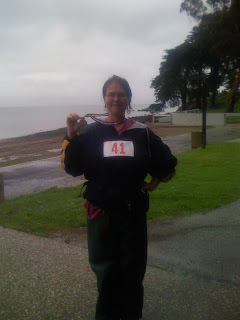 All finishers got a nice medal, in addition to a sweatshirt. My time was 45:49, which is slower than I did in the Pumpkin Run. I probably would have been faster in less cumbersome gear. Oh well, it was a really pleasant run, even with the wet weather.

The early hour and wet weather prevented my fans from joining me, but I got a couple of nice banners to celebrate when I got home! 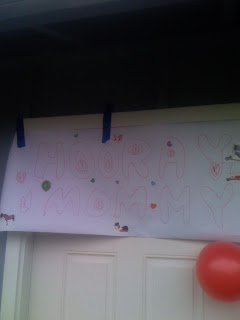 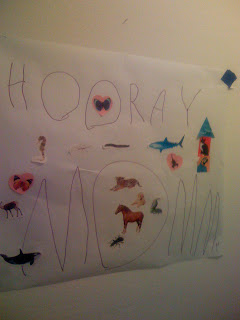 way to go...getting out and running in the not so great weather! congrats on your race.

those banners are priceless!!! congrats to you, what a storm trooper you are!!!! Woot!

Looking at those banners just gave me goosebumps. It's amazing what you've accomplished, and even more amazing thru the eyes of your children. What an great example you must be to them. Congratulations!

Good for you, Pubsgal! I love Coyote Point. Want to get my dad over there as soon as we have some good weather!

Good good job. It is amazing that they never cancel the races. it adds to the adversity and endurance a bit. Fun memories too. On my 40 miler, it was thunder and lighting and pouring down rain for the first 20 miles. HAHAHA

Thanks, everyone! I know what you mean about the banners...I was totally surprised and delighted about them.

Fitness Surfer, that's sweet of you to say so! I'm hoping that I'm not too late in setting a better example for my kids...I could kick myself for not taking better care of myself this way much sooner.

Debby: Hope you all get good Coyote Point weather soon! It's a beautiful place for a nice walk or run.

run4change: I know, I was so surprised that the race was not canceled! Not only did you run a *40* miler, but half of it in a thunderstorm? Wow!

You rock! Way to persevere in spite of the weather. Great photos. :)